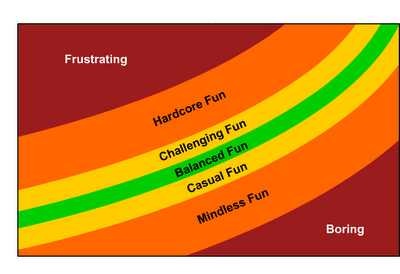 Testing and tweaking are still the most important methods of balancing a game. No matter how well you balance the game yourself, unless you are the sole audience of the game, you will need to know what it's like for others. Getting friends to play and comment on what they found easy and difficult is a great first step. A beta test that gets comments from the actual target audience of the game is even better. But these four tricks can improve the balance early on, and in doing so help focus the design of the game.
Posted by Legend of Gamedev at 3:39 PM No comments:

VIDE is now on IndieDB with some new images/animations.

In celebration of the completion of vide, and to learn how to use the program, my wife made a quick sword swing animation (this was just a quick test, which is why the hand is not grasping the sword), which you can see below in the VIDE flash player (this animation also works on my android device):


The program was easy to use, and the results are quite nice. Being able to animate images makes it easy to make high quality animations. Our next game project, Shattered Worlds (working title), is now cleared to be made in VIDE, so look forward to updates on that.

EDIT: A screenshot of the VIDE Editor for those who are interested: 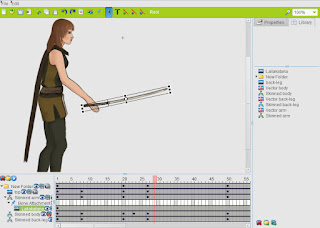 Email ThisBlogThis!Share to TwitterShare to FacebookShare to Pinterest
Labels: VIDE

This will be a short post, but I wanted to inform everyone that the VIDE editor's alpha version is finished. It is feature-complete, and so far seems to be working without bugs, but that wont really be tested until the first game is made using it. It also includes some additional features that I wasn't even thinking of adding originally: the ability to import, add bones and animate vector art, motion paths, and the ability to attach layers to bones (useful for attaching a weapon to a hand, and having the weapon animate with the hand).

I wont be releasing VIDE to the public until I finish a game or two using it (and remove any potential bugs or problems that may arise), but this is big news for Fancy Fish Games. Many games we want to make are dependent on VIDE and were waiting for its completion. Now that it is done, we can begin work on those games. Additionally, we now have our own animation toolkit, which is tuned for the kinds of games we want to make.

Look forward to some updates on our game projects now that VIDE is done!
Posted by Legend of Gamedev at 5:16 PM No comments: