I haven't released a blog post or a new game in a while, so you may be wondering what happened and whether I am still doing One Game A Month. After the Rhythos campaign ended unsuccessfully, I knew that I'd have to take on more work as for most of this year I'd been focusing on making games (and making nothing on them) and that was starting to catch up with me. I'm not yet in a position to work on games full time, even though I'd really like to. However, that doesn't mean I'm going to stop making games.

I have decided to stop making One Game A Month, however. I have several larger projects that I've been wanting to make for a while that I couldn't make in a single month, even if I worked on them full time. One Game A Month was a great experience and helped me release several great games, but now I want to use what I learned to create bigger, more exciting games. Here are my plans for this year (ordered by priority):

Havencall - Havencall is a point & click game my wife and I have been working on the side for several months, and were hoping to release September this year. I still want to release it this year, and we've been working hard getting all of the assets prepared, although it might not be finished until November. It should be very impressive when done, both visually and story-wise. You can find more information about Havencall on it's homepage: http://havencall.com/. Here's a new screenshot of a scene in havencall, this one from the second world:

Rhythos - I also don't want to give up on Rhythos just because the campaign ended in failure, so I'm hoping to finish a demo version of it by the end of this year so that people can try it out and see what makes it awesome, and then attempt another campaign next year. I'm really hoping the next campaign is successful, but if it's not, I'll probably end up releasing a less user friendly/undocumented version of it, mainly for my use (and anyone who can program and figure it out). That way, I'll still be able to use it to make some of my own games, so it wont be a total waste of time. And who knows, maybe it'll still one day get to the point where I wanted it to be since anyone can contribute to the project.

Unnamed Project - If I can, I also want to squeeze in one more game project this year. It's a new project I've been working on the design for recently, based loosely off the original system we developed for Ainsworth. It looks like Ainsworth is going in another direction now, but I'm leaving all decisions about that to Van (the artist working on it) until I get started on coding Ainsworth. However, despite it's flaws, I liked the original system of Ainsworth, and figured out how to fix all of the flaws, but those changes caused the design to be a completely different game. I've almost finished the design, units, spells and equipment for this new game, but it already looks like it's going to be pretty fun. I'll release more details on this game once I start prototyping it, but in short it's a game where you play as a Deity that gives benefits to followers (similar to D&D Deities), and you can convert followers from 128 types to your cause (a little like Pokemon). As for the actual gameplay and battle system, I'll tell you later, but it's pretty interesting and novel.


Next year, I have a few larger projects that I'm almost ready to get started on (ordered by priority):

Aero Empire Remake - It's been a long time coming, I've been contemplating making a remake since Aero Empire fell apart. The remake is now mostly designed, and we have decided to make it in 2.5D (2D sprites in a 3D world). It will be similar to the Captain stage of the original Aero Empire, meaning you'll be able to fly and upgrade your own airship, and travel from town to town accomplishing missions and trading. There will be different regions, reputations, economies, exploration and combat (so, one well designed stage instead of several shoddily slapped together). Since all of the art will be 2D sprites drawn by Matt, the artist who designed the airships in the original Aero Empire, you know that it'll be stunning visually - and I have a few tricks up my sleeve for clouds, atmosphere and depth perception in a top-down view with 2D sprites. I'll give more details about this next year, but we're serious about the remake now and have it mostly designed. It's about time we created this game!

Asylum Game (name subject to change) - Partially inspired by I Can't Escape, this will be a full 3D (not grid based) horror game taking place in an abandoned asylum. The rules of time and space will bend in this game, and like I Can't Escape, the game will rely mostly on atmosphere and exploration - although you might not be completely alone in the asylum! 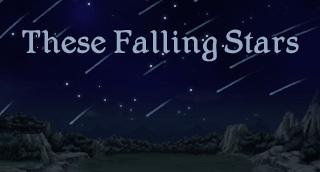 These Falling Stars - An epic RPG I've been wanting to make for a while, and plan to make in Rhythos RPG Builder when it's done. The game is about the rise and fall of nations and heroes, and it's named These Falling Stars because it's about how even things that seem eternal like stars eventually fall. The game has 800 years of history, with three great ages and many nations and people who have risen to power only to fall in the ebb and flow of time. Once again, it seems like the seven city-states now ruling Zythros are on the verge of destruction, and they don't even realize it. Can you stop the inevitable collapse? Is stopping the progression of time even the right thing to do? This game has quite the story, with lots of twists and turns along the way that I'm not going to spoil - so look forward to it!

Those are my plans for the next few years. I'm really excited to get cracking making these games, and am even planning to attempt selling several of them in the hopes of becoming a full-time gamedev. We'll see where my game development career goes, and I certainly have lots of other game ideas I want to make if these are successful! Look forward to more updates on these games, and let me know if you have any questions about any of these games!
Posted by Legend of Gamedev at 12:52 PM 1 comment: